The program of HYPOGEA 2017 Congress is ready!

The first International Congress of Speleology in Artificial Cavities; HYPOGEA2015 was successfully held in Rome / Italy during March 11-15, 2015. Following this event, the second congress, HYPOGEA2017 will be held in the magnificent scenario of Cappadocia / Turkey during March 6-10, 2017. 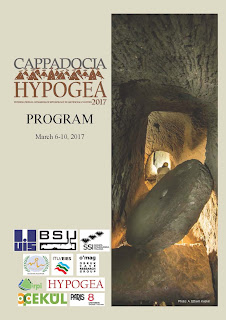 The Congress will be organized by HYPOGEA (Italy) and OBRUK Cave Research Group (Turkey), with the patronages of International Union of Speleology, Balkan Speleological Union, Italian Federation of Speleology, Turkish Federation of Speleology, Istanbul Technical University / EURASIA Institute of Earth Sciences, Paris 8 University, CEKUL; The Foundation for the Protection and Promotion of the Environment and Cultural Heritage, IRPI; Institute of Research for Hydrological Protection of the National Research Council of Italy, Municipality of Nevsehir and Directorate of Nevsehir Museums.

The main goal of HYPOGEA 2017 Congress is to continue the exchange of experiences acquired at the international level in the field of artificial cavities which had begun by HYPOGEA 2015.

The program of HYPOGEA 2017 Congress is ready and downloadable here.
Nessun commento:

Proceedings of International Congress Hypogea2019 can be downloaded here in full

Proceedings of International Congress Hypogea2017 can be downloaded here in full

Proceedings of International Congress Hypogea2015 can be downloaded here in full

Journal of sepelology in artificial cavities